The crash of the Sukhoi Superjet 100 (SSJ-100) on Wednesday came as something of a shock to those in the flying profession and the airline industry. The plane, which left Jakarta’s Halim Perdanakusuma Airport, was doing a demonstration flight when it tragically slammed onto the steep slopes of Mount Salak in West Java.
The accident left many puzzling questions, which hopefully will be answered once the voice and data recorders, or the black box, are found and studied.

The SSJ-100 is a Russian collaboration with European companies to produce a highly sophisticated 98-seat passenger airliner. It comes with two engines that are friendly to the environment, is highly fuel-efficient and has a noise level well below the minimum set by the International Civil Aviation Organization (ICAO).

The cockpit, which is almost identical to Airbus’s design, is fitted with the latest Fly by Wire technology, a state-of-the-art avionic system and even a “joy stick” to control the plane’s maneuvers.

The aircraft comes with a Traffic Collision Avoidance System (TCAS) that alarms pilots about impending obstacles in the air. The Ground Proximity Warning System (GPWS), installed since the first design, warns pilots whenever the plane flies dangerously low.
The ill-fated plane was also the one that Sukhoi had constantly used and thus closely monitored as part of its continuous effort to improve the product. On the back of the plane, there was a test flight console with two seats for engineers to monitor. They are apparently standard members of the crew for this particular plane.

In short, this plane was in a top shape and was flown by a highly competent crew, including Sukhoi’s own test pilots.
It had to be. The plane was part of an ongoing SSJ-100 promotional and marketing tour of Asian countries. Before Indonesia, the team had left Russia to visit Kazakhstan, Pakistan and Myanmar, and was planning to stop in Laos and Vietnam before heading home.
The tiny broken pieces of wreckage found on the slopes of Mt. Salak left a strong impression that the crash came from a head-on collision rather than the case of the plane swiping the mountain and crashing.

We have also learned that there was radio communication between the pilot and air traffic controllers to suggest that the plane, which was then flying above the 7,000 feet-Mt. Salak, had requested permission to descend to 6,000 feet.
This is the conversation that investigators need to look into. Why, or what caused, the pilot to request to go down to 6,000 feet from an altitude of 10,000 feet, while he was flying above a mountain that was 7,000 feet?
This is difficult to comprehend. Normally, if a pilot is flying in a mountainous area faces thick clouds, he would request permission to climb up. Why did the pilot request to descend instead?
There are many other questions that are hard to answer.
Based on the available information, this plane was equipped with two Emergency Locator Transmitters (ELT) that should transmit signals as soon as the plane crashes or falls deep into water. The transmission would have been detected by the National Search and Rescue Agency to be able to locate the plane.
Neither transmission worked, however.

Fortunately, a SAR helicopter spotted the wreckage visually on Thursday morning. It would be hard to imagine if the plane had crashed in an area concealed from a certain altitude from above.

That Wednesday, the SSJ-100 had made an earlier flight before the second ill-fated flight. One passenger in the first flight recalled that the weather in the area was not particularly good. The passenger assumed that the pilot may have done this deliberately to demonstrate the plane’s flying ability through thick clouds and turbulence.

On the flight home, another passenger recounted about how low from the ground the plane was flying. Of course, a lay person could not tell whether the plane was doing this as part of the flight demonstration or if it was approaching a landing.
Nevertheless, these and many others are legitimate questions because it is simply hard to accept that a plane as sophisticated as this should crash into a mountain.

When we talk about advances in aviation technology, we should also deal with the possibility of fatal accidents caused either by recklessness or the tiniest mistakes in using the equipment.

Besides high skill and strong discipline, mastering high technology also requires diligence and top-notch physical condition on the part of the users. The tiniest mistakes in reading the indicators on the display panel could lead to accidents.

Operating high-tech equipment is highly vulnerable. Familiarization takes time before one masters it completely. Mistakes happen, especially when making a big leap in technology. This is why research and development goes through a lengthy process.

When switching from one system to another, it requires a habitual change on the part of the users that can be very challenging. To cite just one small example, aircrafts built by Eastern European countries use the metric system, while planes built in the West use “feet”.
This is just one example of how small things can become problematic without diligence. It is one thing to embrace advances in technology but completely another to switch from one system to another.

Let’s hope that the black box can be found soon and so that the cause of the tragic crash of the SSJ-100 can be determined. Finding answers to these puzzling questions will also be useful in avoiding a repetition of the accident.

(Jakarta Post Saturday May 12,2012)
Chappy Hakim
The writer headed the National Team for the Evaluation of Transportation Safety and Security in 2007. 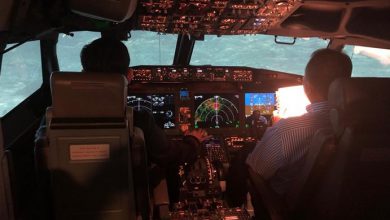